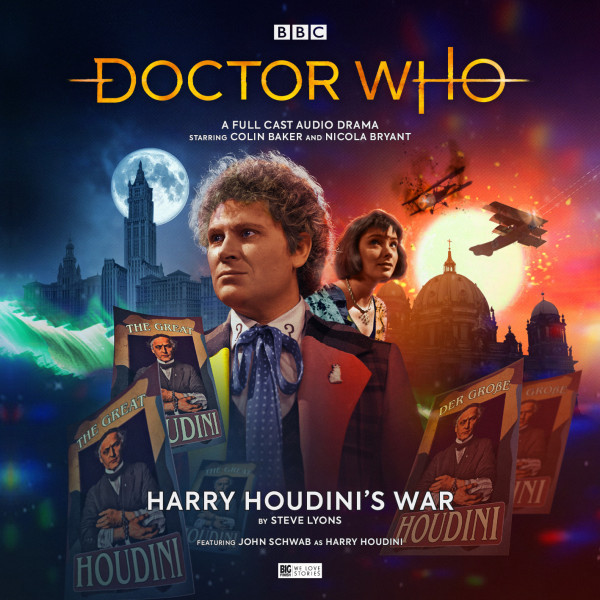 This is rather beguiling story, at least I found it to be, I could not get into it, although lets place this as a marker of the events of the year 2020 so far, this was listened to in isolated lockdown due to the pandemic. I hope that when I re read this it reminds of the day I started to listen to this and also write this review. This story is time hopping around the power of Houdini the magician and also World War I and the Germans involvement in this conflict, so this as the immediate feel of Indiana Jones and the PULP B movie style that it is associated with. Colin plays a rather different sort of Doctor in this outing, with us seeing him almost playing the bad guy, not the normal Doctor, he is siding with the Germans, and seemingly giving Perry and Houdini up to assist in the Germans. The Germans are trying to reign in the power of something not of this earth and they need to understand the powers that Houdini, they seem him as a direct threat, they also have the rudimentary elements of a science that they should not have in the early part of the twentieth century. They have accessed and seemingly are using the Doctor to understand this not of its time technology, a technology that they should not be permitted and the dangers of them launching this to win a bloody war. There are some twists and turns in this time whimey outing for Doctor number 6, but the real thing about this is that the adventure starts for me in the middle of the story, I would have liked to have understood earlier back story and build on that as opposed to have come into this almost at full pelt, there is a need in my opinion of a the contextual part of the narrative and why the Doctor was and where he was in the respect of the story line.

Nicola is excellent as Perry in this and plays a sort of go between linking the main thread of the story with the actual narrative. This is not one of those that I think you can just sit down and let it flow over, the sub plot is the direction for this story, so it is important that you do not have this on and let the concentration wander it a telling of a story that commands it to be listened to in it’s entirety and in full, there is a simile that springs to mind about this. This is a story about a magician, and the you have to be alert to the slight of the script in order for you to appreciate the subtlety of the telling of the tale. This overall is not a bad release but it certainly not the most dynamic of the series with the pairing of Colin and Nicola. I was expecting a bit more than it delivered, but as the over used term I refer to, a moderate Big Finish release is still worth a million more than others are putting out in this genre of audio science fiction.