257. Doctor Who: Interstitial / Feast of Fear 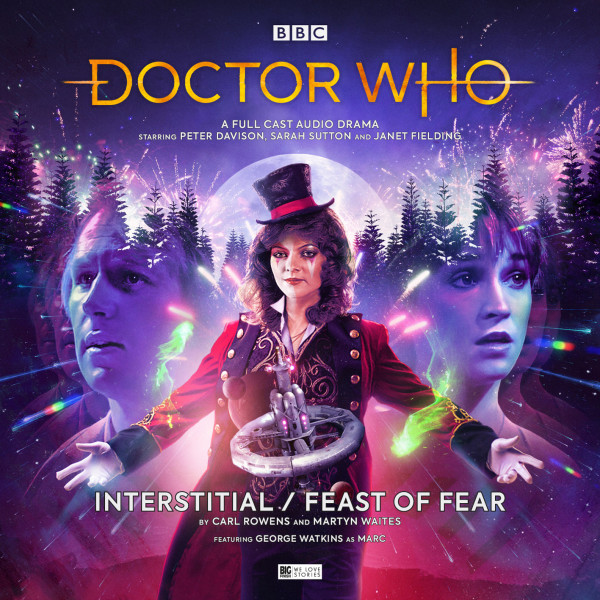 Two for the price of one, well that is the fact given that we have two 5th Doctor stories to wrap our ears around. Accompanying the Doctor on these outings are Nyssa, Tegan and the waif that they have acquired called Marc (see 256. Doctor Who: Tartarus) for more of this new companion with 5. This time we have sci fi first off in the shape of the Interstitial by Carl Rowens, a story that tells of the mad scientist trying to control the very power of time. A sort of King Knut if you will syndrome, it all comes unstuck when it interferes with the fabric of the universe and sends the Doctor crashing in on, and ultimately to put pay the party. Now, let’s get this off my chest. This story is okay, but it is far from perfect, it doesn’t feel that well fleshed out, and I for one feel that the writer Carl Rowens has done a B+ here, and next time must try harder. Whether this is Carl’s first attempt at writing a Big Finish Audio I can see by doing a quick search and look around the internet that he has written a story for the Class series. However, I fear that this story, tries too hard. It’s just that 1% of target. It’s not bad, it’s got everything you come to expect from a Who story, and it has Davidson, and company all giving it their best chops, but you cannot make a silk purse and all that, you get the jist. I found the story overly snippy, sort of here there, and nowhere, and the whole conceptual creation lacked for my part, a real drive. No sense of rhythm which is what all stories need. I am obviously sitting here after listening to this and giving my opinion and that is exactly what this is, but, sometimes, writers, and directors, actors for that matter, get a little cocooned in their world. So ordinary folk like me, can cast them some reality. The reality is, this is dry, unexciting and frankly a let-down. What a shame. Moving on to the second one, well, it didn’t in truth have to be dramatically stunning to win over, against the first, but, the second, is wonderful. In fact, the fact that it had to give way to the first, makes me wonder. We have a cracking story set in Ireland at the time of the great famine. We have an emotional Vampire who is literally changing the face of entertainment, and, to my mind, seems to be a forerunner for Cirque du Soleil. The Doctor can stretch his legs here, and with a rather able attired cast does so wonderfully well. This story is a real retro pleaser, it gives off the feel of “did I miss this when it was on the Beeb in 1986”. First class from all parties here. I think from a personal perspective that coupling the futuristic with the historic, or as I coined the phrase histofutoristic is a winning formula time after time. It is represented since Who began, and, therefore in its originality provides a more entertaining time. Feast of Fear is the winner by a country mile. I think that Martyn Waites, a Geordie, and already an established writer, as well as comedian and once bar tender, as certainly written some very classy Who here.

Overall this should have been a 5 star release, alas due to the let down of story one, it hits a three and bit.