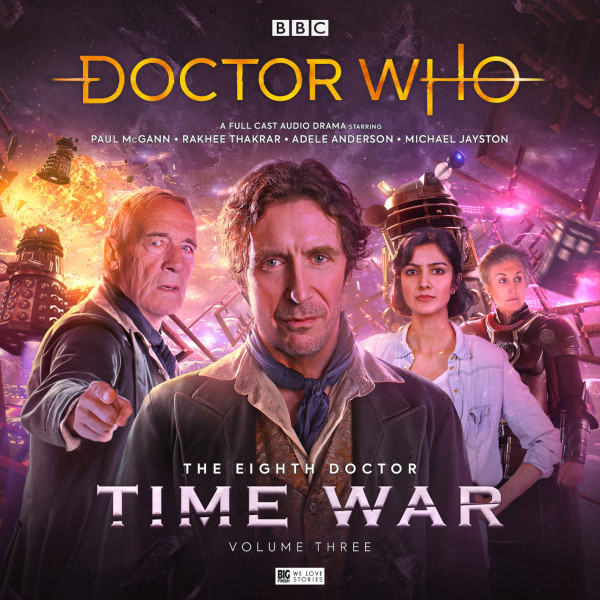 Time War Volume three with McGann and the gang. Split over four episodes we start proceeding with Bliss doing some form of multiple time line recall therapy. With the Doctor managing the process. However note to Big Finish. Audio does not lend itself readily to flashback that well, and the actors, who try their best, with the script that is presented, the simply bloody awful, production of this opening episode will have you checking as to whether or not the audio track listing is correct. You are going to need the concentration of a Buddhist monk to follow the story thread. Simply put I cannot recall such a badly put together piece of audio editing in a long time. There is little no gain in this opening episode. It simply does not work. I just hope that episode two shines through, and brings some decent story telling with a story line that is easier to follow. This opening episode is just like a split trifle all over the place and a real mess. Where as the second installment is slightly reminiscence of a awful film I had the displeasure to watch called Snow Piercer. Although the film dreadful comparison is more a mark of the fact that the story concerns itself around people being controlled by hunger and then fed food which provides them with little to no nutrients thus leading to a subjected population. The Doctor of course is not happy about the general ruling of this situation and there is a dark twist in the tale here, and the story is a marked improvement on the first. The third offering in the box set see’s us in a familiar territory with the Doctor entering a medieval era, in a sort of pseudo The Masque of Mandragora style, however, we have the old adversary in tow, in the shape of the pepper pots who are pulling the strings, with a last of it’s kind life form, this is a superb tale, very traditional with the excellent talents of McGann making it all the more memorable. The final tale explores the true nature of the Time Lords with the Valeyard providing the Doctor with a battle against himself, and exploring some self analysis that for better or worse, shows the real side and nature of the Time War.

Overall what did I think of this latest release in the series, Meeh!, I felt it sort of missed the mark a little bit, and for that made me rather this was a not as of the same quality of output as the other releases that have been in this series, and it was ok in parts, and excellent in others, in fact I would have said that it was better than normal, but, there were some parts that I really struggled to keep my attention. The main issue sometimes is that overly complex story telling is not geared up for audio unless you adopt the production values of say Audible whom would probably spread this over a lot longer length of time. Dracula for example is a double figure listening hours as opposed to this which is over its standard format length, whether this is a budget restriction or something to do with the marketing of the product it is certainly not helping in the main process which is to tell a story.