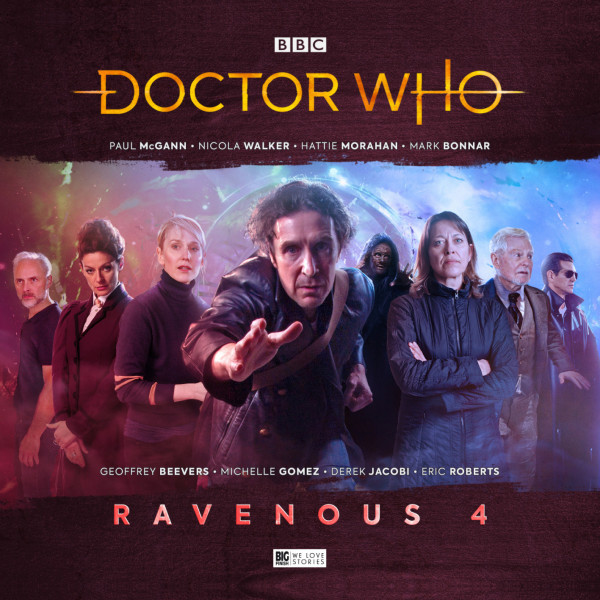 4 more stories in this box set, recorded with the wonderful cast that accompanies the No.8. We have a continuation of the last box set, with the 11 lurking in the shadows to start with, and the Doctor accompanied by Liv and Helen. However, this box set is the equivalent of a mic drop, the history of the Ravenous, and their creation. So be warned, this is a expose, secrets are told, an insight to what has been going on for a while, one  that we have been listening to for the last couple of boxed sets that have been put out by Big Finish. It is might I add in a quite satisfying manner, in which it is delivers and provides answers, and also a little expose of the Who Universe and the 8’s battle’s. Be prepared I feel that there is a cliff hanger left for us in the last episode which may be a conclusion or not, who knows in this universe whether we are all to ready to write off certain elements for good. I get the idea that we are not.

OK lets get on to there are four episodes presented here, with a running time of 5 hours plus, this is a sound investment in audio entertainment of the Who variety, after all you have the master of all the audio performing Doctors in the shape of McGann, and consummate professional anyway, just seems to load his acting gun, and shoots, his warm rich tones, with that slight rasp of his Liverpudlian accent is just enough gruff arrogance, that makes this Doctor a little more edgy a little more like a character that has traveled galaxies and seen too much and lived too long. There is a worn quality that he brings that just adds that thing you cannot create, you either have or haven’t got, and that is class. What makes these releases so good is you then add to the lead a superior cast with the likes of English actor Nicola Walker and Hattie Morahan who add just the extra sparkle, Nicola as certainly stamped her mark all over the character of Liv, and for me proves a sort of modern Lela in the moments her temper gets raised, she, is much more the straightforward shoot from the hip sort of companion, I don’t think she has a problem backing down from any situation. She is feisty to say the least. Hattie brings the much more measured, yet non the lesser, sort of academic foil, the sort of perfect opposites for each others performance, this is a good match of companions for the Doctor, and I would hope that there are further adventures with these two planned.

As for Mark Bonnar, his madness as The Eleven continues unbound, like a simmering pot, ready to blow, he is seemingly better, then mad, all in the same moment. It is tantamount to his skill to be able to act out slightly different characterisations for each entity and then still have the recall to make them work, bump and grind almost against each other, in this release especially, as he has to reveal a little more than before, and it is of no great giveaway, that there are four incarnations of the master involved in the telling of the story, which brings me onto the other mentions. Sir Derek Jacobi, Eric Roberts and Michelle Gomez all vie for the role of the evil time lord alter ego with real relish, in fact let’s not forget that Geoffrey Beavers also is here for good measure, when you have a 4 master mash up, the Ravenous and the Doctor this is a mammoth release.

Ravenous 4 answers a lot of questions for me, with some real standout performances, but overall what really wins out here is the fantastic story telling, the level of the writing by Fitton and Dorney makes for a first class release, and one that will either close a chapter or open a whole new one – Oh yes and the Ravenous have developed a real quiet disturbing presence that in this release is without doubt their most unpleasant. This is a release you should go out and get.