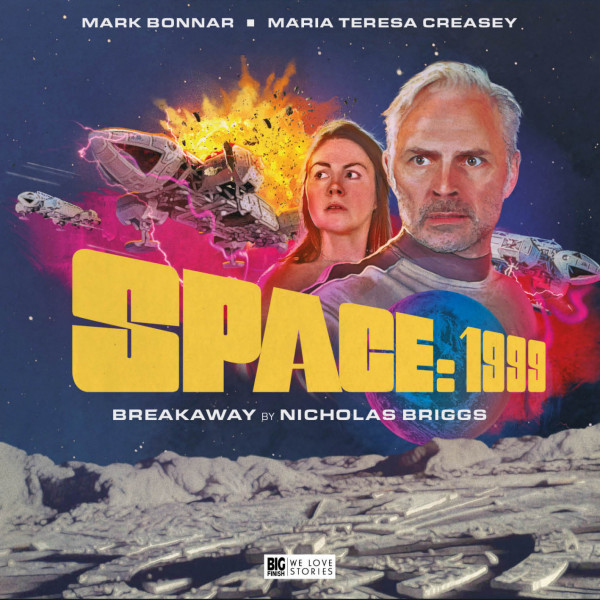 Big Finish, do their re-imagining of this classic Anderson TV outing from the 70’s. For me Sunday lunchtime watch, and often the cause of an argument with my mother, as I was expected to sit at the Sunday Lunchtime table and enjoy my traditional British Roast Beef and two veg. However often, I won the argument and would sit in front of the TV watching the titles roll on this ITC programme. IT was exciting and new, it had American actors in it, who were good, at being actors. It also had some rather clever storytelling, and the writing of this programme was probably far better than I gave it credit for, or more I understood. The thing as well about this was it was an Anderson made series. So, it had that attention to detail that only Gerry and his excellent team of staff could add. I think it is a of the most telling sign that a lot of the production staff and people who worked on this production, went on to Star Wars, Lucasfilm’s and other mega stardom of Science Fiction drama.

Ok enough of the retro memories of the TV outing, to prepare for this release I started with the intent of watching the original newly purchased Blu Ray of Season 1, from Network (click here to purchase) I ended up watching the whole of series 1. It was a blast, and it holds up well, in fact, with the new vogue of “vintage”, and yes things from the 70/80’s is now retro, just to make you feel even more older than you want, this has stood the test of time well. In fact, the effects stand up to a greater degree, mainly I think because this was shot on film stock and not horrible fuzzy video tape of the time.

Ok so what have Big Finish done with the seminal classic outing of UK, SCI-FI, from my golden age of my childhood. Well for a start they have cast Mark Bonnar as Koenig, the exasperating commander sent to Moon base to “sort things out”, only to discover that he has been sold a pup. We have Maria Teresa Creasey as Dr Helena Russell, the part in the TV series played by Barbara Bain. It would have been a nice touch to have had Barbara in this somewhere, but I understand that budgets, and securing an 89year old American actors time is probably not the easiest thing to do. However, Bonnar is a clever choice as he has displayed with other BF outings, and this is not exception, he has the command, and presence to portray the Commander with guile and vigour, and the downright arrogance that we had from Landau performance. However here is where I must depart from the comparative of the two, they are too completely different beasts, apart from the obvious of it being audio and the other a visual medium. However, the audio makes this much darker, and much more grown up, in the feel of the story telling. I like what BF have done here, they have taken the story, and they have put it on steroids, they have given it a more adult and much bleaker, less sparkly encounter with the people. I wonder if Christopher Penfold who was the script editor on the TV series would have taken it down this route should I gather he had the full control over the production, alas it was a shared task with the Anglo-Italian production teams, due, to Anderson needing foreign investment to get this to be made. That is where I think the audio production we have now wins out, with a tiny budget, the strength is stacked in favour of the story telling, and as such, the actors have the stage to really make the retelling a much more, dramatic, space opera to unfold.

Will BF take up the option, will this be successful with their audience, or the Space 1999 fan base. I really cannot say, one thing I have found, that if you have seen Breakaway as per the TV version, then I strongly advise you listen to this, for one thing, this feels like the story is told as it should have been, with all the subtitles that we had to lose due probably to costs.

Well done Big Finish, this is a superb. Please Nicholas can we have some more.