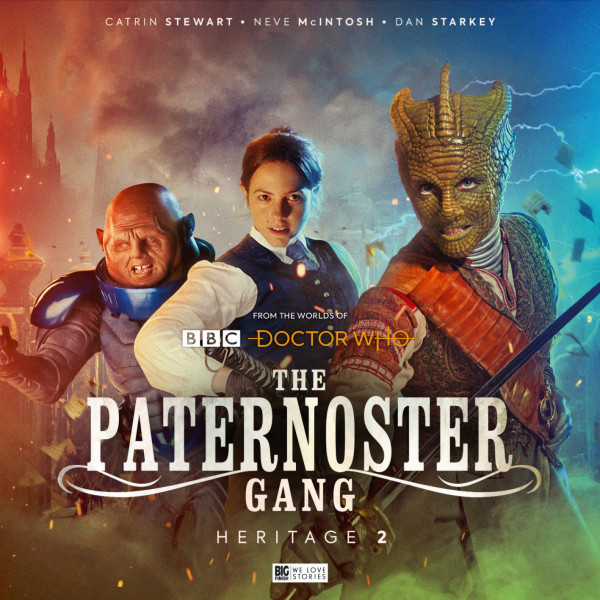 2.1 Dining with Death by Dan Starkey

We kick off the second Heritage box set, with our favourite Reptilian Detective, the butt kicking martial arts lady in waiting and of course the friendliest Sontaron on the planet, nay the universe Strax. Who would have thought it when these three characters were devised, bought together that they, after their TV life would fill the shoes of Jago & Lightfoot, in Big Finish’s range? Let’s get that Elephant out of the corner. You see when those two intrepid detectives left us, this was in my opinion the most obvious candidate of a successor. Let’s face it, everything fits, that is not being disrespectful to the legacy, that is left for us in the form of Jago & Lightfoot either.

Dining with Death, is a well written story, the story is one of alien races in-toleration of each other, whilst the dissidents of each factor, use earth as a refuge, whilst still managing to carry on their fights. Unbeknown to the people of Earth that is. It starts to unravel when, an arranged negation falls after both parties whilst enjoying a working lunch, get blown to smithereens. The results are that, to stop outright war, Madame Vastra, Jenny and Strax have to play hosts to a alien summit. But sometimes mistrust is a river that runs deep. So, don’t always trust those who you think are the ones who have your back.

2.2 The Screaming Ceiling by Guy Adams

The gang meet up with Carnaki, the ghost hunter extreme, a sort of Victorian version of Yvette Fielding the big differences being that a Carnaki, is a real showman, a man hellbent on making a living out of the exploration of his so called haunting and exorcisms. It comes a surprise when he finds no one knows who asked him to attend the Castle Kraighten, not even the Laird, seems to have been the one to employ him to find out what the hell is going on at the Haunted House. However, his biggest shock is finding the Paternoster Gang in situ, there task is a lot different. As Dan Starkey tells us, Carnaki is a sort of ghost hunting Sherlock Holmes who is not the best, coping with life. Carnaki was the creation of William Hope Hodgson. The coupling of the Victorian spiritualist detective and the Paternoster Gang is a perfect match. The story being one of those that mixes the science fiction with a gentle rub of a ghost tale.

The final outing for the Gang, is to do battle with what is believed to be the English take of a evil spirit, in fact it is believed that the entity of Spring Heeled Jack is that of extra-terrestrial as opposed to a Gollum. But Spring Heeled Jack is in fact a front for an extra-terrestrial who is using the fact that some are better off in an alternative timeline to the one they are in currently. The gang try and uncover what is going on, and to investigate the mysterious goings on, that are proving to be the centre of everyone’s attention and concern.

Three stories, here do justice more than ever of the tenure of Big Finish, expanding and continuing the Who Universe with these spin off tales. The fact that they are cast with the original cast, makes the authenticity of the new stories even more entertaining. This is the key to a lot of the Big Finish licensed output based around our favourite time lord, it is not imitation, but extension. Here is to the next volume release of the Partenoster Gang Volume 3.